This is the third post of a 3 part series in which I upgrade my Mac Pro 1,1. Since the 1,1 and the 2,1 are essentially identical, this guide will apply to both. I will be writing under the assumption that you are using similar parts to me and are upgrading a 1,1. I take no responsibility if you screw something up, but I can try to help if you post it in the comments.

The software could have easily been the easiest part of this build, but due to my stubborn behaivour, it quickly dissolved into being the most difficult. All of my frustrations came from my refusal to use the inferior GT640 I mentioned in the previous post. If you want just get on with it, skip about half way down the post.

I will explain all of this to the best of my ability, however, the reason the reference 750ti did and will not work in the Mac Pro is still unclear and my best googling efforts have not turned up any useful results.

I'll start at the begninning, and what made the software so tricky in the first place. Before I had done any of the hardware, I had planned on installing Mac OS 10.10.5 Yosemite. "But those old macs can't go past 10.7 Lion", you say. You are nearly correct. From the factory, the Mac Pro 1,1 and 2,1 have 64 bit compatable hardware, from the CPUs to the Frontside Bus to the Northbridge to everything. All of it. Everything is 64 bit compatable, which is required for the use of Mac OS 10.8 and above. However, Apple, being the small minded goons they are, decided to put a 32 bit efi firmware on the motherboard. That is the only thing that breaks compatability with the newer Mac OSs. That narrow minded thought process is what locked the plenty powerful Mac Pro 1,1 into "Lion and Lower". To fix that, a glorious enterprising mind over on the MacRumors forums has created a new boot.efi that you can insert into the installer of any of the new Mac OSs and it should work. That's the theory, anyway. I had quite some difficulty in getting this to work at all. Once I understood the process, though, it is quite simple. I'm not going to repeat it here, because there are loads of other tutorials, but I will link to the thread where all of this is explained in thorough detail as well as the process that it took to get them there. I will warn you that the first 100 pages or so of posts are outdated, as a result of better methods becoming available and newer files that need to be used. That being said, I do recommend you take some time to read a lot of it. It's about two day's nonstop reading at my pace (YMMV), so it's quite the long haul, but it is well worth it and you might even feel somewhat enlightened.

Anyhow, I created a Yosemite install USB (as I have my reasons for not wanting the latest Mac OS), and booted it up, and promptly formatted my installation of Mac OS Lion. To make this mistake even better, I don't have the DVDs that came with the computer, so I was shit outta luck. This in and of itself was not a big setback, but the unforseen consequence of my actions was that I did not realize my GTX 750 was not compatable with the Mac Pro for whatever odd reason. It should have been, and that specific EVGA model was confirmed to work by several sources, so I'm not sure what went on there. I wasted three whole days making trying to force that card to work, but it refused. Allow me to explain what I mean by not working; I had both graphics cards installed and hooked into my monitor as per my instructions in the previous post, and had the monitor set to the GeForce 7300's outpout. I could boot into Yosemite, I could piddle around with the slow refresh rates that the card offered (as it's not supported by Yosemite), but the second I installed the nVidia web drivers and rebooted, nothing. The fans would rev to wind tunnel speeds, creating an unholy racket, but no graphics output from either card. I wasted 3 days, 5 reinstallations of the OS, and countless PRAM resets figuring out that I needed to use the GT640, as the 750ti wouldn't work. Popped in the 640, everything went smooth as butter. Oh well, lesson learned


=~= Actual Instructions Start Here =~=
First things first: DO NOT GET RID OF YOUR LION PARTITION/DISK. Save it, it's helpful beyond belief. I made this needlessly more difficult on myself because of the way I did things, you don't have to. You can find tutorials on how to shrink Mac OS partitions all over the internet if you only have one hard drive.

To install Yosemite the easy way (this can be done with only the Mac Pro):
Simply go to the first post of this thread. Download the file seen in the picture below (it's pretty huge, about 5 GB. Go outside and take a break or something).

Once you've downloaded the file, you can then head on over to disk utility. Grab an 8GB or larger USB stick, and erase it. Make sure it is the one that's selected in the sidebar, else you could erase the OS. 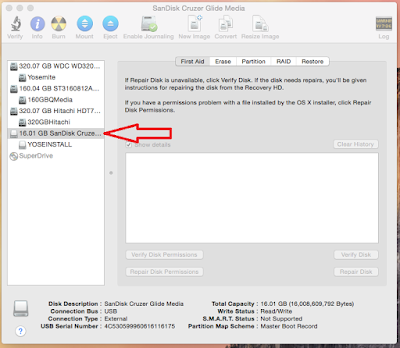 You'll want to make sure the format is set to "Mac OS Extended (Journaled)". This is default, so it shouldn't be different unless you've messed with it, in which case you'll know how to change it back. Once it's done formatting, select the "Restore" tab at the right:

Then change the source to be the installer image you downloaded earlier, by clicking "Image" and
navigating to wherever you've saved it. 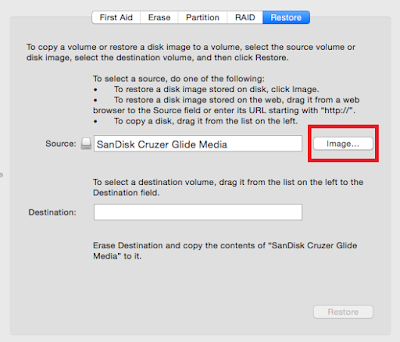 Then change the destination to be the USB disk, by dragging it over from the left. At the end, it should look something like this: 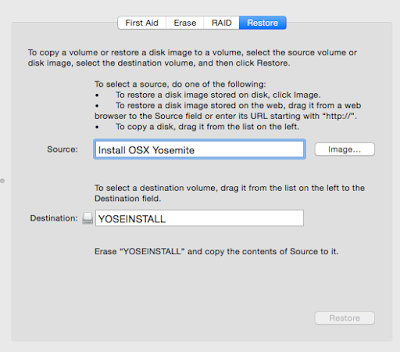 Where "Install OSX Yosemite" is the file name of the installer, and YOSEINSTALL is the name of the USB disk. Click restore in the bottom right, and wait for it to do its work.

Once its finished, plug the USB into one of the back USB plugs in the machine. The boot USB won't be recognized in the front ports every time, for whatever reason. Shut it all the way down, and hold the "Option/Alt" key until you hear the chime, select the USB drive from the menu, and boot from it. You are then free to install OSX as normal.

To install Yosemite the more complex way (this should also work for other unsupported versions of Mac OS, but no promises. Requires another supported mac):

First thing you'll want to do is make an install USB as shown in this guide. That will leave you with an installer that will work on supported macs only. Next, you'll want to have another, Yosemite supported mac handy (I'll refer to this as the Macbook, cause that's what is most likely), and a firewire cable that works in both computers. Most newer Macbooks will have FireWire 800 ports, which are the faster of the two on the front of the Mac Pro. Reboot the Mac Pro into "target disk mode" by holding down "T" until it chimes and shows the FireWire symbol on the screen. Plug the firewire cable into both computers and check to make sure the Macbook sees the drive(s) in the Mac Pro. Plug the install USB into the Macbook, and restart the Macbook, holding the option key while it boots, select the install USB, and install OSX to the drive in the Mac Pro. It is absolutely essential that you select one of the Mac Pro's hard drives, or you will erase your laptop. Finish the installation as normal.

Once it is done installing, reboot the Macbook, but keep it plugged in to the Mac Pro. Next we'll need several things: the updated PikerAlpha boot.efi, and the ability to see hidden files in OSX. The PikerAlpha boot.efi can be found on his page, here. Download either one, the only difference they make is the color of the boot screen, grey or black. Next, you'll want to open up the "terminal" application on the Macbook. You can find it in Applications > Utilities, or under spotlight. Next, paste the following comand into terminal:

Then type or paste:

The Finder will restart, and you will be able to see some stuff you weren't previously. Next, open a new Finder window and navigate to "System/Library/CoreServices/" and paste a copy of the boot.efi there. It will ask to overwrite the old one, agree. Then navigate to "usr/standalone/i386/" and do the same. You should now be able to reboot the Mac Pro into OSX Yosemite. To hide the files again, just paste the two commands in the terminal, replacing YES with NO in the first command.

Once you've booted into OSX, you'll notice that it is running indescribably slow. This is because OSX does not support the old graphics card at all, and the new one is likely not supported out of the box either if it's and nVidia card. Do not fear, however, because the new card is still supported by nVidia. Simply navigate to MacVidCards* and download the driver for your build of OSX. Do note that there are different builds even within releases, for example 10.10.5 has 5 individual builds. It is easy enough to find the build though, just click "About This Mac" in the Apple menu, click the version number and the build number will appear where the box is. 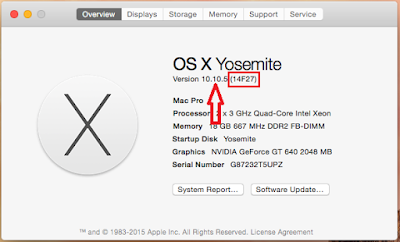 You can then download the correct driver from MacVidCards or the nVidia website. MacVidCards is the easier one to navigate, as they're all listed on one page there. Download, run the package, reboot, and you're nearly set. Do note that the above is not required if you have a Radeon/AMD graphics card.

The last thing we'll be doing is upgrading the efi firmware so the computer recognizes the CPUs and can take full advantage of the sleep functions and the like. Plus it makes the System Report look pretty by listing the actual names of the CPU instead of "3.0 GHz unknown". Navigate to this post on the netkas forums, and download the attatched tool (shown by the red box) to the Mac Pro. 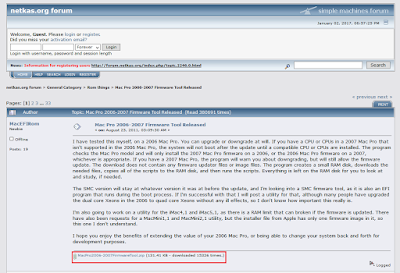 Run the tool, and follow the instructions it mentions in the popup that it shows when it's done, and you'll be all set. Some people reported that it took more than one reboot for the Mac Pro to recognize the CPUs, so if you only see one CPU in system report you'll want to restart it again.

That should be it, as far as I can remember. Links I found helpful are below, as well as some screens of my About This Mac. 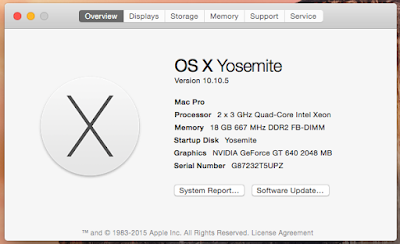 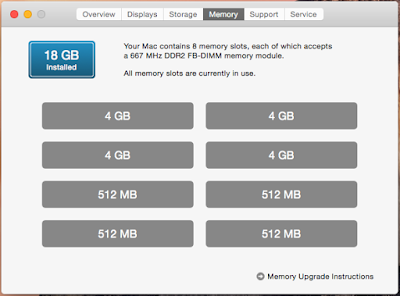 *MacVidCards is a wonderful resource if you want to buy a flashed card, however a lot of the graphics card options they list are limited to the Mac Pro 3,1 or above. This is because the operator/owner of the site assumes that you are running only the supported operating systems of the graphics card. Assuming you do end up installing 10.8/x or higher, you can get those cards and they will work fine. I found that information, posted by MacVidCards on the MacRumors forums, so it is likely to be accurate. Due to the latest releases of the GTX 10-series cards and the Radeon 56 and 64 cards, I can no longer verify this information as accurate. Purchase at your own risk