Last Christmas, I received a Mac Pro 1,1. It is in decent condition, the feet are not bashed in at all, but the handles on the top are a little dented on the front and in somewhat worse shape in the back. It has a lot of stickers from what appear to be a government organization or something of the sort on it, and goo smears where older stickers have been removed. There are some minor blemishes on the two sides, but the front and rear "cheese grater" portion is in perfect shape. It came only with a keyboard, mouse, and a power cable from an iMac of similar vintage, judging by the plastic disk where it enters the PSU on the back of the machine. Unfortunately, I don't have any original software install disks for it, so that's a bit of a bummer. It has two 2 GHz Dual-Core Intel Xeon processors, four 512 MB, 667 MHz, DDR2 FB-DIMMs, for a grand total of 2 GB of RAM, an nVidia GeForce 7300 GT graphics card with 256 MB of VRAM. Most interestingly of all are the three separate, included, HDDs, each hailing from a different manufacturer. Two are 320 GB, and one is 160 GB. Oh and it has a SuperDrive, in case anyone cares. It also came with a, shall we say peculiar, smell (weed, it was definitely weed). It was the 'low end' Mac Pro when it was released, and some upgrades are due on its ten-year anniversary.

I'm planning on doing most of the software upgrades before the CPU upgrades, but for those I need more RAM and a better graphics card. For the RAM, I'm using OWC's 8 GB upgrade kit for the Mac Pro 1,1 and 2,1. I chose OWC over eBay for two reasons: although eBay is cheaper, I have ordered from OWC before and it was pretty good quality, and all I could find on eBay were 512 MB sticks or obnoxiously overpriced 2 GB sticks. For the graphics card, I'm using my EVGA GTx 750 ti (with 2 GB DDR5 VRAM) that is in my windows desktop at the moment. I understand that it's not fully supported, but I think I can work around it. If that doesn't work, I can use the GT 640 that I have lying around. I would have bought a Radeon 7950 or 7970, but they are all beat to hell from being used in bitcoin mining rigs and are still overpriced. If I can find a deal on a mint condition used one, I'll get it flashed with the Mac ROM and use it instead. The CPUs I will be using are the best ones you can throw in this machine: Intel Xeon X5365 3.0 GHz Quad Core. I used plural in the above sentence because it has two CPU sockets, which makes me really giddy for some reason.

I mentioned the software upgrades, but I didn't say what I'd be doing. I will upgrade it to boot Mac OS 10.10 Yosemite, so I can run most of my Steam games and use a Steam controller. I'll still be using my trusty Levetron Mech 5 keyboard, though. I will also upgrade the firmware to the Mac Pro 2,1 firmware so the OS will recognize the CPUs and use them to their fullest extent.

After all of the hardware upgrades are done, I'd like to clean up the case and remove the bend in the handle, but that will be for a later date. 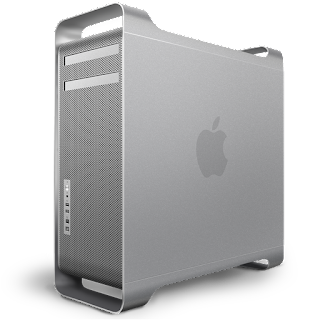