Triple Booting on a PowerBook G4

What on Earth am I thinking? I'm going to boot Mac OS 10X, Debian, and Darwin on a single machine. Why? BECAUSE I CAN, DAMMIT!

So far I've gotten OSX and Debian running smoothly, but my installation of Darwin seems to be a little borked. In addition, to install the necessary network drivers for Debian, I need to reinstall it from a mini .iso because the download repositories are pointed at the cd and not the server. Fun stuff. As far as Darwin goes, I'm basically clueless, so I need to do a lot of research. Do I need to just reinstall it? Will Darwin work with Yaboot? Am I asking the right questions?

It's all in the learning curve, I suppose, but I shouldn't have leaped right into triple booting when I haven't even done any dual booting. Oh well. The more you know, right?

I'll post updates when I make a good amount of progress, so be sure to check for them at the usual place. Eventually I'll get around to making a solid guide with links and stuff, but that's for later.
The creator = The48thRonin at 7:16 PM No comments:

I may be changing the name a bunch over the next few days, so keep an eye out for that. I will not change the URL though, so if that's how you find me, then it'll still work.

I have received the parts for the Mac Classic project, and I'm going to start assembling it soon.

School started last Monday for me, so I may not have a ton of time for the next month or so. Nothing I can do about that.
The creator = The48thRonin at 7:08 PM No comments:

Hey! I'm back. Sorry for the longer than expected absence. We were moving and getting the new and old houses ready for the move, cleaning out the new house, and blah blah blah boring stuff. BUT, That's not why I'm here. Today I'm here to write a review about the Sony PS Vita. Well, I have lots to say, but nowhere to begin. Sooooooo... STATS (these apply to the WIFI model, 'cause that's what I've got):

So with that out of the way, I guess we'll head on over to the user experience.

The UI is a very novel one, what with the... peculiar arrangement of icons and all. There's a row of three, then of four, then of three again.

This is, in my opinion, a suboptimal use of screen space. In addition, the icons drift around the screen, and they feel too 'floaty'. It's not very noticeable until you think about it, but it is there. This has a weird, distracting effect when you stare at the screen, thinking about what game to play. Fortunately, if you use it a lot, you'll only have to look at once and a while. There's also that goofy notification bubble that, while it fits the 'theme' is very bleh. With the negative out of the way, I like the little black ribbon at the top. More specifically, I like the fact that it lists the current running apps. You'll notice the Sony and PS Vita logos on the bezel, and for some reason I'm drawn to those. The clear D-pad, PS Button, start, select, x, square, triangle, and circle are pretty nice. They have a good response and a small 'click' range. The top buttons are kind of cool, being that they're kind of hinged and you can press them from the right end or left end of the button, but if you want to press the middle, it doesn't work as well. A cool feature that could easily make this product more expensive is by putting lights on the buttons, but that isn't an official thing, unfortunately. 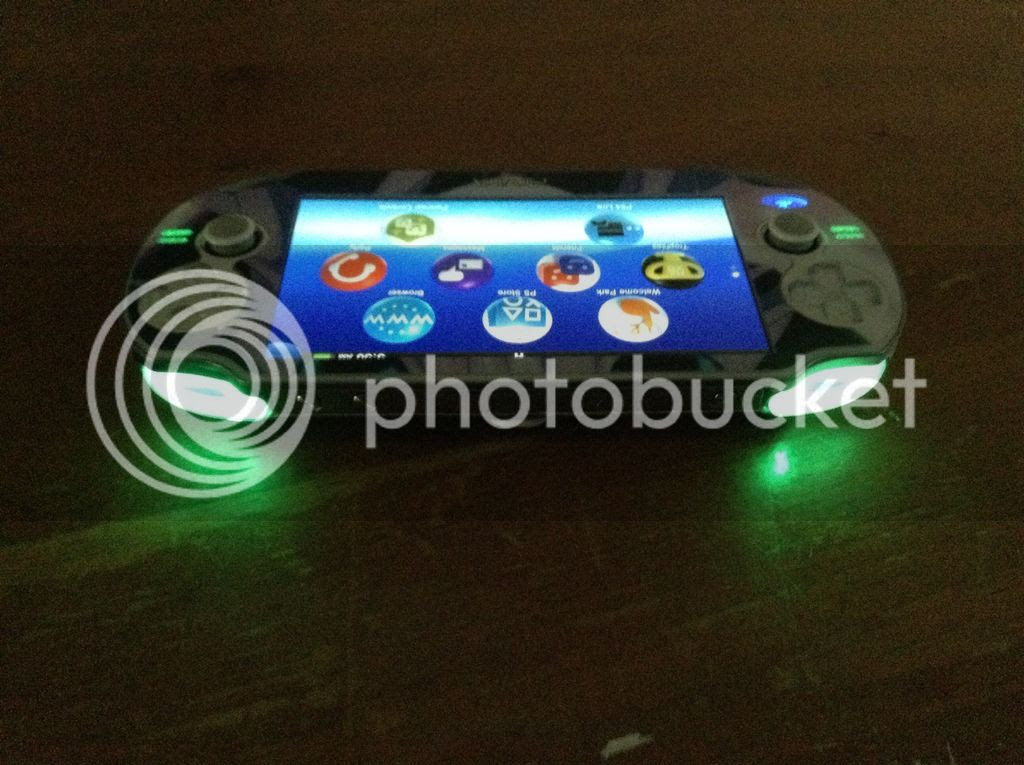 The analog sticks are good, nothing special, but good nonetheless. I found the volume controls are a little too fine-grained, and there's no mute button, even a software one. You have to hold volume down until it's muted. This bothers me. The built in speakers are mediocre at best, but seem to even out and get less grainy as they get louder. For some reason, playing sound through the headphones is way better, so that's what I do. The screen itself has weird problems, and I haven't researched them to see if it's just me*. Every once and a while the screen will continue registering a press even when I'm not. The back track-pad doesn't have this problem, though. Speaking of the track-pad, it gets scratched fairly easily, so watch out.
Back into softwarez, the free selection is incredibly limited in the store, and the library itself isn't very large. If you're at all like me and bought CD's for all of your PS3 Games, then you're SOL. You'll have to buy them all again, and some don't have PS Vita versions. I tried the game streaming thing for a grand total of 5 minutes, and, while nice, the remapped controls for R2/R3 and L2/L3 are still only a touchpad. It was really easy to set up, unlike trying to find a goddam Nvidia Shield, which is what I got this instead of.
The memory is annoying, to say the least. It's entirely proprietary and entirely too expensive. $70 for 16 GB is inexcusable. At least use SD cards or something. And as far as 'hacks' and 'mods', go buy a PSP, because they basically don't exist.

All in all, It works good enough to replace the iPhone 4 that I was using as an iPod, so that's pretty nice. And frankly, all I wanted was to split my phone and my portable entertainment into two devices, and it did that very well. While I didn't touch on any of the preinstalled apps, they were all pleasing to use, and the battery life was pretty much as advertised for me. If you are looking for a casual device to play crappy games on, look elsewhere because this device is a PS3 in a smaller form factor, so expect to drop some cash on memory and games, because that's what it's for. It was made so you can sit down on your bed, or in the airport and play good games while you wait for a little while. You have to have more than 5 minutes to play a game if you want to use this, because it is just a PS3 in disguise.


*I have sweaty hands occasionally.
The creator = The48thRonin at 9:23 PM No comments: